When we were planning our itinerary for our Hong Kong trip, I knew that Day 5 will be one of my favorite days.  I lined up so many sights to see for this day, combining some touristy spots together with leisurely neighborhood walks, so I knew that it would be interesting. While in the previous days, we’ve gone around Lantau Island and saw the sights in the Kowloon side, this day was all lined up for the Hong Kong Island side.  Hong Kong Island was the original British settlement when Hong Kong became a colony and that’s still very much reflected in the architecture and the continuing role of the Island for Hong Kong’s expat community. On the other hand, Kowloon has a more noticeably local Cantonese flavor.

Central is one of Hong Kong’s main and most interesting districts and is even considered the heart of Hong Kong, especially in the Island side. It’s easily accessible by walking from our hotel which is located in the Sheung Wan/ Western district and it was this accessibility to Central, among others, that made us choose Sohotel for our hotel.  Getting to Central from our hotel was just a 5 to 10 minute leisurely walk, passing through the charming sights of Hollywood Road, which is a great area for antiques and art galleries.

One of the sights we passed through along Hollywood Road was the Man Mo Temple, which was one of the first traditional style temples built in colonial era Hong Kong and is the largest of its kind of temple built in honor of the Taoist gods of literature and war.  I love visiting temples such as this because I think they’re quite a novelty coming from our Catholic-dominated Philippines. 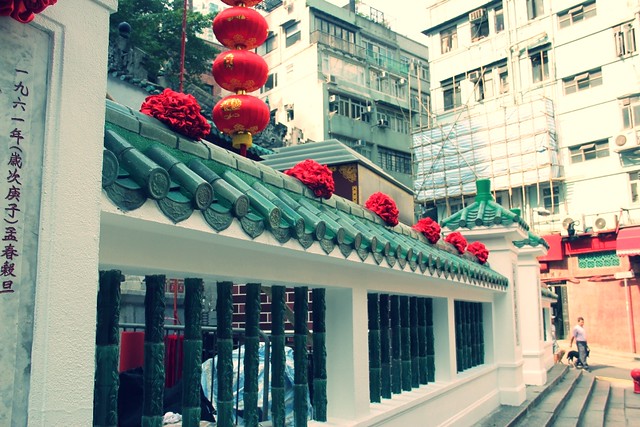 Central is really quite a lovely mix of modern and colonial-era buildings (like that historic building in the first photo above), with Chinese elements (like temples) and quaint storefronts. And along with pockets of quiet areas, we also found the hustle and bustle that is typical of Hong Kong’s way of life. A few steps from Hollywood Road, we reached a portion of the Central Mid-Levels Escalators, the world’s longest outdoor escalator system and has become a distinct Hong Kong landmark.  I found this quite cool not least because it’s predominantly a part of Chungking Express (a film made by an Asian director I really admire, Wong Kar Wai) and because there’s nothing quite like it here in Manila! After we got off from the escalators, we found ourselves on Lyndhurst Terrace Street, where the famous Tai Cheong Bakery is located. We tried their specialty sugar-coated donuts (HK$5 each). Tai Cheong is also known for their egg tarts (said to be the most favorite egg tarts in Hong Kong) and is a good place to pick up goodies to bring home. More pictures of the sights and Hong Kong slice of life in Central: After lunch in Lan Fong Yuen, we walked around some more in the popular Lan Kwai Fong area and found this interesting installation along one of the many public stairways (stairways like this were everywhere in Central!) , which doubles as a sitting area/ mini park—a perfect resting place for commuters and DIY sightseeing travelers like ourselves. Central was certainly a joy to explore and it was nice to know that by simply exploring our hotel’s nearby neighborhoods, we saw a side of Hong Kong that was quite different from what we had so far seen.  This is what I really love about traveling DIY—if we had gone on a package city tour, I think the only time we would have been on street level would be when we have the free time to go shopping. The rest of the time, we would have been just mixed in with the tour crowds or shuttling back and forth on coach buses. 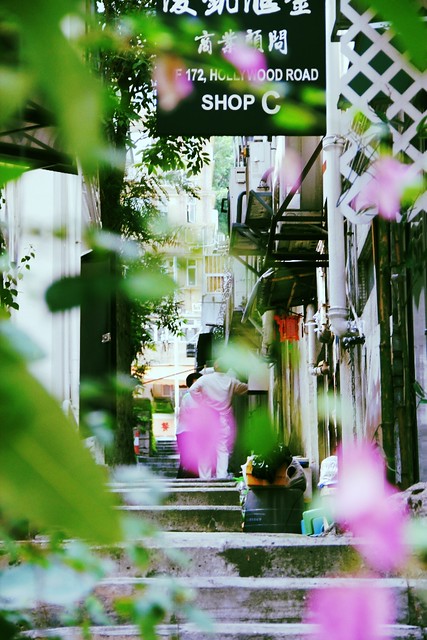 I personally think that in order to really get the true feel of of a city, yes, I guess you must visit the tourist spots and the so-called top 10 attractions/things to do because that’s what makes that city what it is and why people visit it (for example, how can you go to Paris and not see the Eiffel Tower?).  But more than that, to get a real appreciation of traveling to that city, I think it’s important that you should really go out of your way to see the side streets and the little neighborhoods. And as you let serendipity guide you and as you discover the place’s nook and crannies, and come upon beautiful sights that you didn’t or couldn’t have planned in your itinerary, I think that’s only when you’ll really, really fall in love with that city. And that’s when you’ll really fall in love with traveling.