Sunset Goddess Manila’s Reminiscing Macau 2008 Series. Click here for the TRAVEL GUIDE.
Continuing our tour of the Macau Heritage Walk, we finally arrived at Macau’s famed Senado Square, the center of Macau’s Heritage Walk. And of course, this is the primary spot for tourists, especially those on a day trip from Hong Kong. This is the Leal Senado Building, which was the seat of the government of Macau when it was still a Portuguese colony. And this is one of the national banks of Macau, and I was surprised to learn that here, instead of having a Central Bank print their money like we do in the Philippines, the money is actually printed by two private banks, the Bank of China and the Banco Nacional Ultramino. So there are two “versions” of the same bills/denomination. Am I such a geek for finding this cool? hehe. So aside from the old buildings, what else is there to see in Senado Square? Well, even if it’s the premier historic district in town, it also seamlessly blends in modern amenities for the modern tourist—that means, the whole place is packed with shops, shops, and more shops. And restaurants too. But they did it in such a nice, almost organic way, as if the shops were really part of the winding walks. I love the fact that they didn’t build a mall in this area, otherwise it will ruin the charm of the place! And I had to have my photo fix! This was taken next to Pharmacia Popular.
And of course, the lovely cobblestone streets and details are aplenty in this area, including cobblestone artworks too 🙂 My VNC gold matte sandals for our Macau trip. The best pair of flats for travel 🙂

For lunch, we went to good old McDonald’s right on Senado Square. One of the nice things about traveling is discovering how a foreign place is different, or the same, as one’s own country. And that includes beloved fast food of course and how perfect because you can find McD’s practically in any country of the world 🙂 We had grilled chicken burger a ordered something closely resembling our own Chicken Nuggets here. They call it Shake N’ Dip where they give you a bag where you put the nuggets and you add powdered flavoring. I remember how it tasted very differently from chicken nuggets—I guess because of the powder flavor, which I remember tasted very “Chinese”. I don’t know how to describe it except that way! It tasted like something from a Chinese restaurant—which is a weird combination considering I was in McDonald’s! This is a classic example of how McD’s adapts its food to local tastes. Then we also went to Starbucks right across from McDonald’s and only because A. has a growing collection of City Mugs from Starbucks all over the globe. Although I couldn’t resist getting a Frappe for myself 🙂 A good way to cool down since it was getting hotter in the afternoon. After lunch, we headed to St. Dominic’s Church, which is right in the heart of the square. This church is so pretty. That’s me right outside the church with my Frappe! And look, the Chinese mother and son from the A- Ma Temple are in the background! 🙂 I love seeing that even one of the priests here was a Filipino. Just goes to show how Macau is quite tied to us even in our Catholic faith. This made me homesick but at the same time, it was nice entering such a quiet church amidst the bustle of the square outside. Almost like I was back home in the Philippines. We lighted some candles. 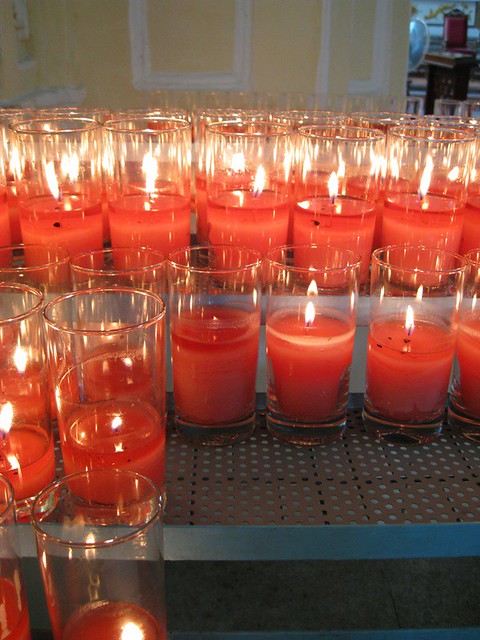 And we even saw the Chinese mother and son again! 🙂 Then off we went to St. Paul’s Ruins, which is of course one of Macau’s famous landmarks, if not its most famous. On the way there, we passed several stores, including Chinese medicine shops. It reminded me of our very own Binondo/ Chinatown. But without the funky smell 🙂 And along the way, we couldn’t resist stopping and getting some souvenirs/ pasalubong which abound on the road to St.Paul’s and of course, the famous almond cookies from Pastelaria Koi Kei. I couldn’t get enough of these cookies! Here’s a staff member from Pastelaria Koi Kei making fresh almond cookies. They hand out samples of the cookies and other goodies for free 🙂 Now, finally, we get a sighting of St. Paul’s Ruins. There were just too many people that time of day and we had to rest first with our loot by this statue by the steps of the church. That climb was not as easy as it looks with all the walking that we did and our shopping bags! 😉 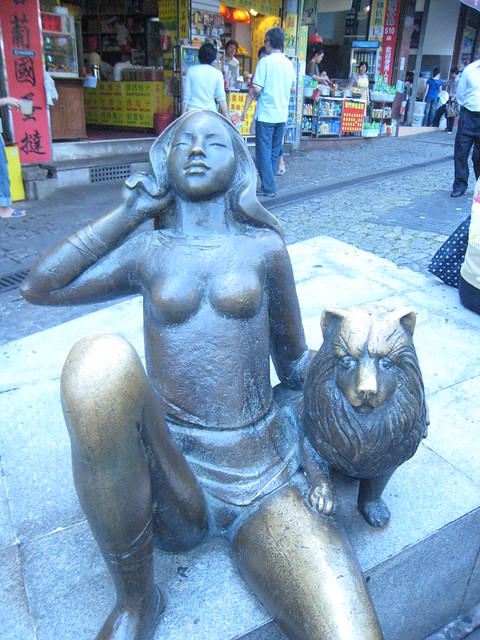 More climbing to do And finally reaching the stone facade, which is now what’s left of the 16th century church. During its time, this used to be the largest Catholic church in Asia. And we even went out the back and there was a museum showcasing some of the original church stones and crypts of the Jesuits, who established the main cathedral. Our original plan was to go on to Guia Hill but it was so hot and we were already getting pissed. That plus the tiring walk (we walked from A Ma Temple to Senado Square!) made us go back to the Venetian Macao, take a bath for the second time that day to cool down, and instead of going back to the city center, we spent much of the afternoon playing baccarat and blackjack in the hotel. We learned how to play blackjack just the night before and with our “beginner’s luck”,we  was were able to win some money 🙂 hahaha.I wish I could go back to Senado Square in the late afternoon and into dusk and early evening. I’m sure it would look especially lovely then. Next time, DEFINITELY. But until that next time, I’m sure glad we went back to our hotel. All in all, I won HK$1000! 🙂 hehe.