For our first night in Macau, we went to the main island and explored the hotels and casinos. First, we had to see Wynn Macau, one of the most luxurious and elegant hotels there. 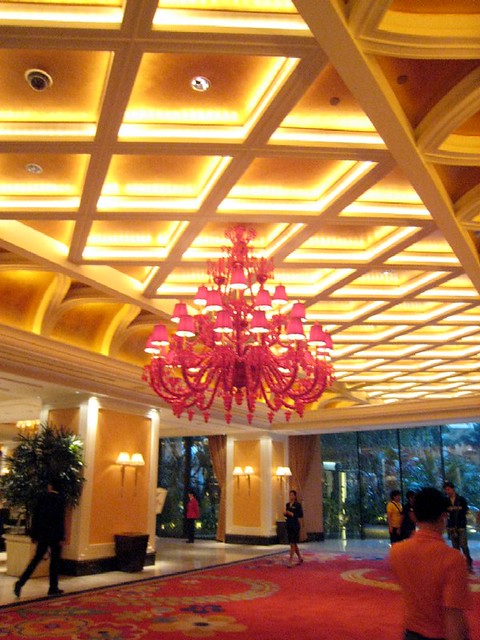 At the time, Wynn was the only property with luxury brand shops. (Now you can find them in the Four Seasons and even in the Venetian). We looked around, asked around. Louis Vuitton was cheaper than here in Greenbelt 5 but no, we didn’t buy anything fancy 🙂
While we saved on the luxury brands, we didn’t scrimp on our dining choices. That’s why for our first night in Macau, it had to be none other than the Ristorante Il Teatro in Wynn, one the most well-reviewed fine dining restos in Macau. As evident from its name, Il Teatro is an Italian restaurant. For appetizers, we ordered degustazione di capesante– jumbo scallops 3 styles, gratinated with zucchini, seared with eggplant puree and steamed with tomato tea (MOP/HK$ 148). But there is more to this restaurant than just the super fine Italian food. Part of the reason why it’s a must-visit restaurant is because it is Il Teatro or the theater in Italian or more precisely, the theatrical Wynn fountain show that can be best viewed only from Il Teatro, where one gets front row seats to the show. Alas, we weren’t able to get a table by the huge windows (they were full or reserved!) but this was still the priceless view: After dinner, we explored Wynn some more, got stuff from the souvenir shop, played (& lost!) in the casino.  We also chanced upon Wynn Macau’s Tree of Prosperity, described as a “choreographic masterpiece of music, video, and light” but the show was not yet on when we there. 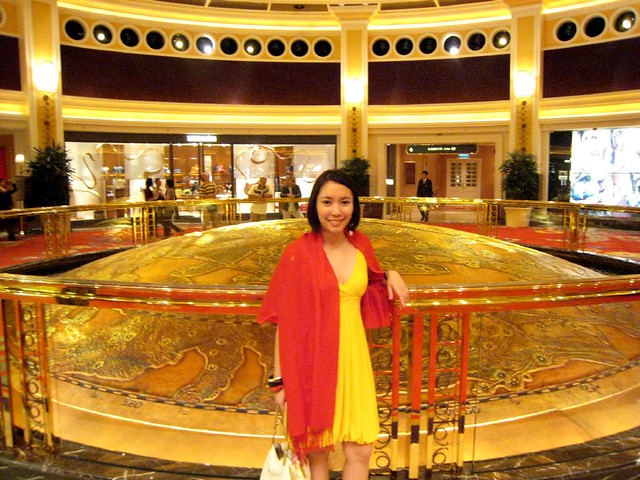 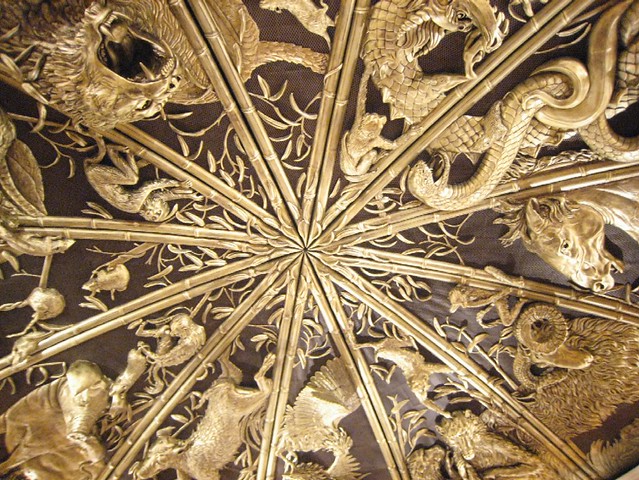 The are outside the hotel was also great for taking pictures and just taking in the sights and lights. 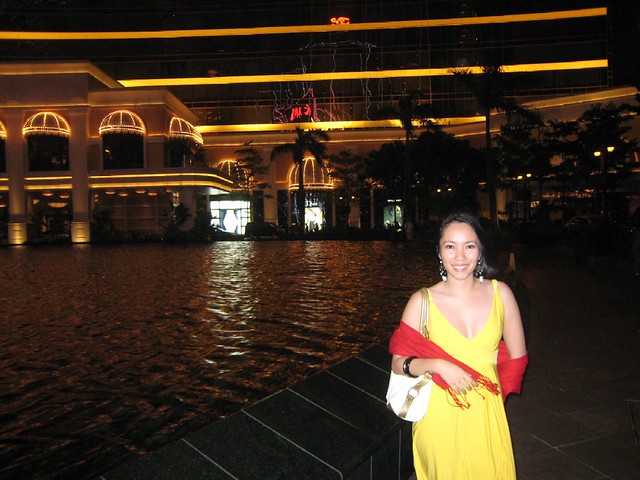 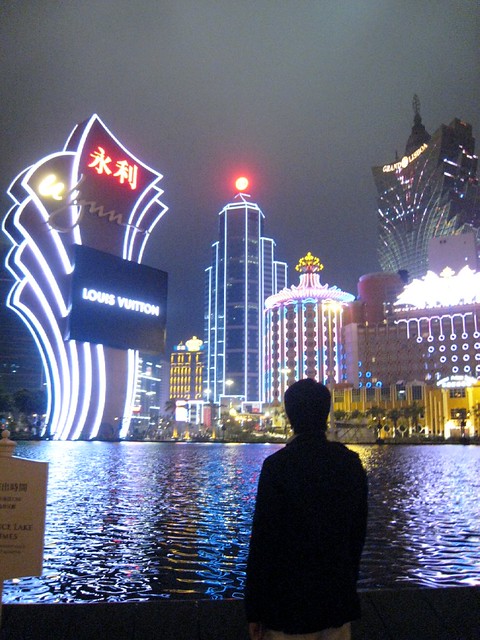 Then off we went to explore Casino Lisboa and Grand Lisboa, two of the most recognizable landmarks of Macau as they were one of the first casinos on the territory. I remember that Wynn was the only casino with a non-smoking area and while their facades are both unmistakable and unique, I didn’t care much for the interior architecture/ lay-out of the two Lisboa casinos. Although, we did have some “fond” memories of going there. In Lisboa, we lost each other and while I was standing there waiting in the lobby, a Chinese guy approached me and began speaking in rapid fire Chinese. I could only quicky correct him that I didn’t know any Mandarin Chinese. Loitering in hotel lobby + cleavage baring dress= the wrong impression. 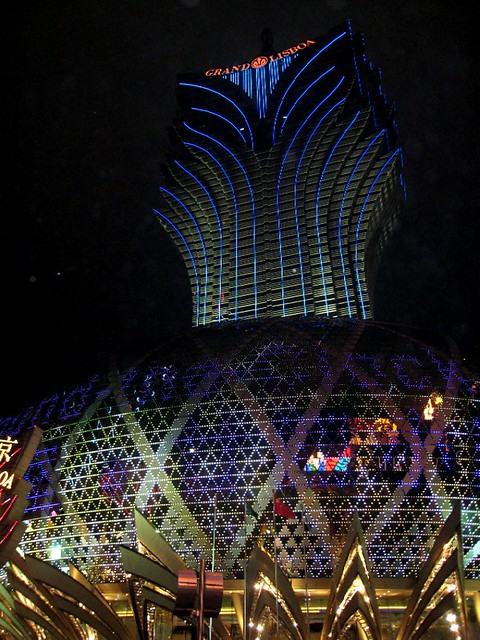 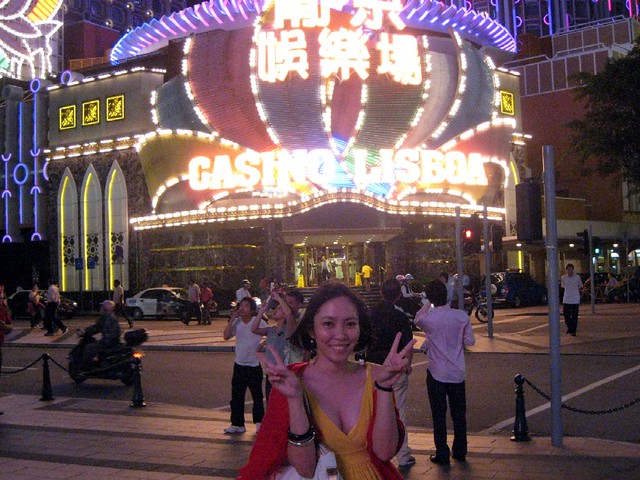 Then I had to walk outside Lisboa by myself as I was already getting lost. A young Chinese guy catcalled to me “Hello Filipina!”. I didn’t think badly of it that time but soon after we went back to Manila, I saw a documentary on how the incidence of prostitution of Filipino women in Macau had risen along with the rise in its economy. Sad but true. It’s not unusual whenever we travel abroad to have first hand experience of the misconceptions/ generalizations/ stereotypes foreigners have about us Filipinos, which are more often than not based on their own experience and biases against our migrant Filipinos living and working in their countries. Well, this is just another reason why we MUST travel and go on holidays and show to the world that yes, you mainlander, we can afford to go on holidays in YOUR country too! 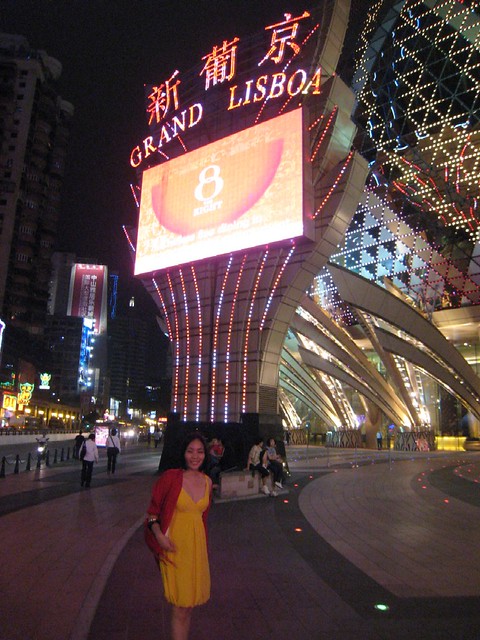 Anyway, if I had known about that and that I was going to walk along the streets at night & by myself, I wouldn’t have worn that dress! But oh well, recounting that incident only made our Macau trip more memorable, with me being teased with “Hello, Filipina” to no end!

From the Wynn Macau Press Room:
Attire is casual elegant. Men are required to wear long pants, non-sleeveless shirts, and closed shoes. No sport hats.
Children above age 5 are welcome.