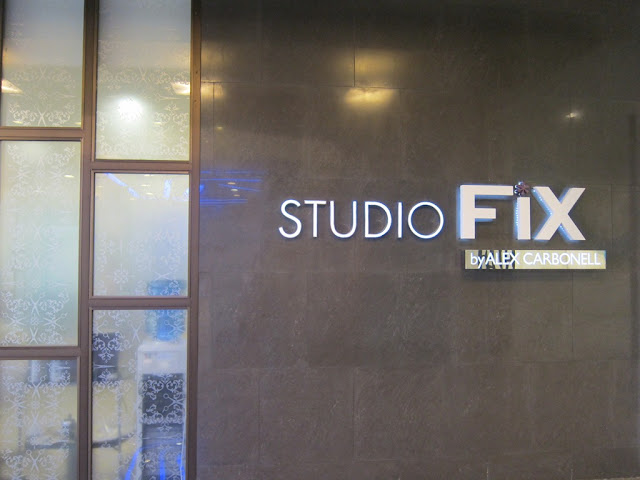 As usual, I was welcomed by attentive and courteous staff at the reception/waiting area. I booked two days in advance and I like that they even texted to remind me a day before to confirm my appointment. This practice also reminds busy clients, just in case they forgot about the exact time of their appointments. I told Alex that I wanted to grow out my bangs and get some long layers.  I readily confessed to him that  over the year, I went to stylists from Fix Lab and Fix salons (also Studio Fix’s sister salons) which were conveniently nearer to me and since I only had my bangs trimmed. In my last trim, I got full bangs, which you can see in this picture from October. However, the full bangs became problematic now that I was growing them out.  It seemed like all the volume was on the top of my head.  Also, I badly, badly wanted to have my hair colored professionally. The last time I did so was years ago and it was just a full color job, with no highlights.  Since then, I just had my hair colored DIY from a box. The only advantage of having hair colored that way is that it’s super cheap.  Now that my colored hair has grown out, I hated the brassy coppery color along the ends and of course, the roots growing back.
Here’s a picture taken of me on the day of my cut with Alex, with misshapen bangs and hair color which badly needed correcting. For a Wednesday afternoon, I was surprised to find that there were a lot of clients in Studio Fix—a testament to Alex Carbonell’s growing loyal clientele and to how much Studio Fix has grown in just a short time. The first time I’ve had my cut there two years ago, it seemed like it was the only establishment open on the 4th floor.  Here’s another “before” photo:
Then Alex cut my hair.  As always, he worked his magic with just a few snips here and there. Case in point, my problematic growing-out bangs. I think he just made about two snips to my bangs and yet, those two strokes made all the difference. The thick volume was instantly gone and right away, I had more manageable bangs that I know would transition effortlessly as I grow them out.
Then we came to hair color, where Alex once again proved why he’s one of the best, if not the best, hair expert in town.  I told him I want something “drastic”—meaning I want a bold, blonde-ish color. Ash blonde. I could only articulate what I wanted using key words.  But it seemed like he knew right away what I was talking about. He said something about J.Lo’s hair. I haven’t watched American Idol in ages so I had no idea what he was talking about. So I just told him I trusted him.  Then he wrote up an order form for my hair color and turned me over to his assistant, Ellie, who performed the coloring at Alex’s precise directions. Ellie instantly recognized me from my first blog post on Studio Fix, which I really felt happy about.  It’s true, “Studio Fix by Alex Carbonell” is one of the top search terms on this blog! 🙂

Chatting up Ellie as he worked on my hair, I instantly got the sense that he was very experienced and well-trained—an impression which I get from all of Studio Fix’s staff, from the girls in reception to the assistants who wash our hair. Ellie executed hair color instructions from Alex which seemed so complicated that I won’t even pretend I understand it.  It was a combination of highlights and full color, placed at precise areas and with varying amounts, which I found quite novel since it was actually the first time I had my hair foil highlighted. I came in at 1:30 in the afternoon and all the highlighting and coloring were done by 5:30.  From the the three hours of sitting, I was able to learn many things from Ellie—like the fact that Studio Fix color their clients’ hair using the Schwarzkopf brand (and with no ammonia at that) and the fact even visiting international hairstylists have marveled at the “pyramid” technique that they use for highlighting and coloring. Also, Alex suits a color job not only to each client’s preferences but also to each individual’s skin tone, which makes the hair color and highlights unique and matched to each client. After waiting for the designated time for the color to work into my hair, I also got the most amazing head massage ever while my hair was being shampooed and conditioned, something that I also remarked on the last time I was there. In the end, the 3 hours of sitting was all worth it when I saw how the color came out after it was blow-dried. It was EXACTLY the shade I wanted and it was amazing how they came up with it knowing that they used a mix of different shades and textures. .
Once again, Alex Carbonell has worked his magic. Alex told me that I haven’t left the salon yet and there was already another client asking for bangs similar to mine! Before I left, I had my hair styled with a curling iron (mainly because I wanted to see how I would look like if I have my hair permed). Then of course, my real test of a good haircut (and now, also good hair color) is how it looks like the the day after, when I’ve already shampooed and styled it myself: Since it was the first time I had my hair highlighted in a salon, I thought I would be charged both for the highlights and hair color—so I was expecting to pay upwards of P5,000 plus Alex’s haircut fee of P1,200. So I was super pleasantly surprised to learn that my total charge was only P2,350, which is the fee for full color for medium length hair—and because Alex waived the haircut fee! Another quick note on having hair color done professionally.  I had this notion that having highlights and color done in salons is super expensive, especially for a salon of Studio Fix’s level.  In fact, I first thought of just having my cut in Studio Fix then just having the color done in a Fix salon, which has cheaper prices for color services. But after having my hair colored and highlighted in Studio Fix, I thought that I got really great value for money. For the amount I paid, I got exactly the great hair color I wanted in the shade that’s perfect and matched exactly for my skin tone, with each and every strand meticulously colored/highlighted, and had an amazing head massage to boot—and all at the expert hands of Alex Carbonell and his well-experienced colorists and assistants.

Oh, and to preserve the job on my newly-colored hair, I’m now using Pureology shampoo (P1095,  available in Studio Fix, Fix Lab, and Fix salons). It has anti-fade ingredients but what interests me is that it has no sulfate (a chemical that’s harmful for the scalp and found in most commercial shampoos). Lastly, I don’t know if I was given the free haircut because of my blog post but nonetheless, super thank you to Studio Fix! For my readers, I don’t have anything to disclose at this time—my only relationship to Studio Fix is that I’m a client and I gave good, raving reviews only because I was really, really satisfied with the level of service that I received. At the end of the day, I’m just happy to share with you how happy I am with my cut and with my hair color and I know I will be back for touch ups and other services.

Here’s a snap of Studio Fix’s services, which I took because I know so many are asking (please click to enlarge):