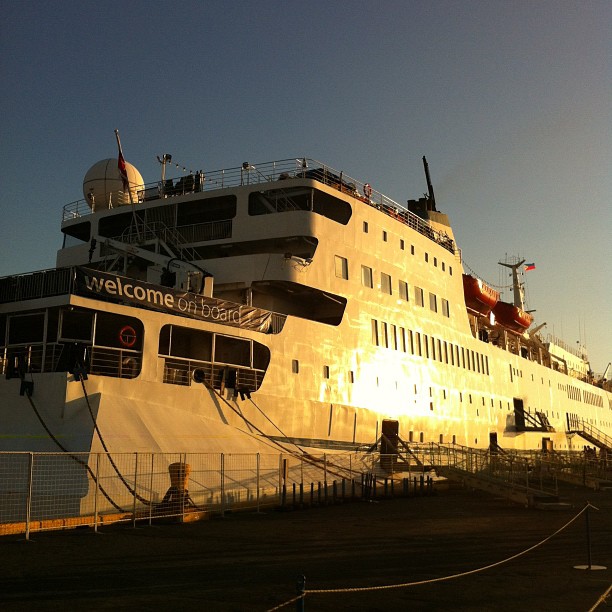 Recently, we were able to visit MV Logos Hope, the ship sailing all over the world and selling books to millions.
The ship is operated by GBA Ships e.V., a German charitable Christian organization. Before Logos Hope, I’ve heard of MV Doulos, also a floating bookstore that was run by GBA Ships, but I wasn’t able to visit it when it was in town. Now, I couldn’t pass up the chance to finally go on a floating bookstore, in fact the largest floating bookstore in the world. The ship has been sailing to ports all over the world since 2009, with a mission of “bringing knowledge, help and hope to the people of the world.” The Logos Hope is docked in Pier 15 of the Manila South Harbor, which is where the SuperFerry ships are docked, at  the Eva Macapagal Terminal (just past the Manila Hotel), so it’s quite near and convenient. We arrived past five in the afternoon. While there was a line of people already done with their shopping and already leaving the ship, I was surprised to see that there was still a steady stream of people going into the ship with us. I’m a water person so I relish the times I get to be by Manila Bay, especially in the late afternoon so couldn’t resist to take pictures and have pictures taken outside: 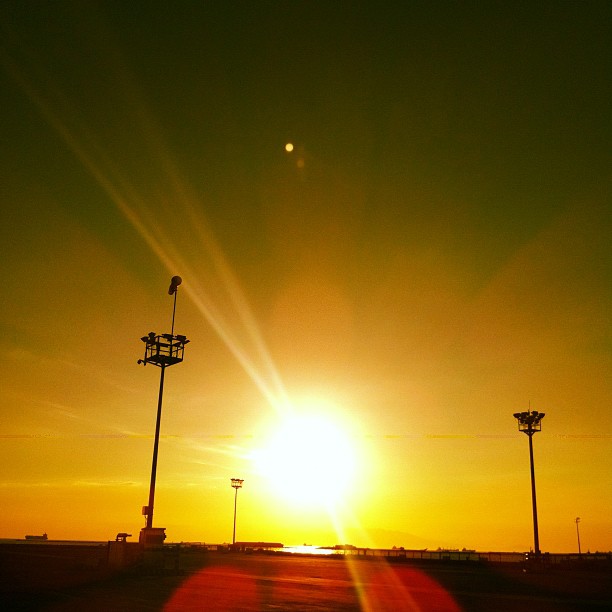 After paying the P20 entrance fee, the first thing that greeted us inside the ship was a reception area where we watched an introductory video about Logos Hope, and where we also learned that the books and stuff for sale on Logos Hope are tagged in “units”, since they are sailing all over the world, and it would be a logistical nightmare to change the price tags every time they had to dock in another country. Luckily, for the Philippines, the conversion was an easy 1 unit = 1 peso. There was also a short photo exhibit the history of GBA Ships along the left wall. 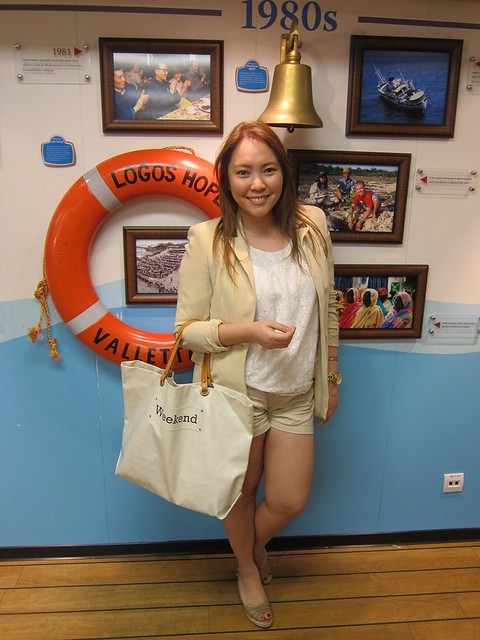 Then, on to the area for books. Once again, I was quite surprised with the number of people who were actually visiting Logos Hope. There were two large areas mainly filled up with children’s books and books on hobbies, science,  and crafts.  There were also a lot of cookbooks, some travel books, and with very little fiction. Of course, since Logos Hope is run by a Christian organization, not surprisingly, there were a lot of books on Christian living and spirituality. For the quality of the books, the prices were quite reasonable (it really depends on the type of books but I would say the price range of the books was from P200-P600. I don’t think I saw a book priced more than P1000). And there were even some that were on sale and were already being sold at very cheap prices.  Near the cashier area, there were very nice blank cards selling for just P50, and gift books and children’s books on sale for as low as P25 each! So if you want the lowest priced books on sale, head on over to the “cash decks” area right away. The lines to the cashier area were really long, and there are areas where the airconditioning of the ship seemed to be not enough because of the number of shoppers. So be sure to wear cool, comfortable clothing. Logos Hope is also manned by volunteers of different nationalities from all over the world, giving the ship a truly international feel. After the main book fair area, there’s still another smaller area where trade books, references, and text books are sold on sale—I got 3 books and a souvenir eco bag for just P500!  And this was where I went gaga and since there was no airconditioning in this area, I wasn’t able to take pictures because I was so busy looking through the books. I’m a book lover and I’m such a sucker even for trade books. My loot was composed of books on Western history, developmental psychology, and fashion—all for P500.  The cashier told me that these books were mostly donated by publishers and since the people behind Logos Hope were selling the books not for profit but for charity, their books are really cheaply priced. I also got a book on daily spiritual inspiration for P300, small gift books for P25 each, and an assortment of children’s books for my niece, nephew and goddaughter.

After the book fair area, we found the International Cafe, where we snacked on ice cream (at P50/cone), and some treats that are not available in the Philippines, like Vanilla and Cherry Coke.  The International Cafe also serves popcorn, chocolates, candy bars, and sandwiches. Logos Hope also has Hero Hungarian Sausages as one of it concessionaires, where Hungarian sausage sandwiches are sold for P100. And in keeping with the Christian mission of Logos Hope, there was also a storytelling exhibit  called “Journey of Life” which kids will enjoy and a video presentation related to HIV-AIDS called “Life X-perience” for older visitors (although that presentation was closed when we were there).  From time to time, they also hold plays and shows in the ship’s theater (there will be an Open Ship Day with family-oriented activities on March 4 and an African Choir will be performing on the evening of March 10). It was certainly an enriching experience to spend even just one afternoon on board Logos Hope. More than just the books, I was fascinated by the lives of the volunteers who give at least two years of their lives to help out on Logos Hope, doing their specific assignments (cashiers, cleaning staff, receptionists, storytellers, translators, etc.) and all the little things to keep the place running.

Even if it was obviously a Christian mission,  I didn’t feel as if they were hard-selling Christianity to visitors, which could turn some people off. It also felt good knowing that the money we spent on the books and food will be going to a worthy cause.  If you have the time, I hope you can also get to visit the Logos Hope, which is certainly a good break from just the usual weekend trip to the malls. Logos Hope will be in Manila until 14 March 2012.
It will then proceed to Subic, where it will be docked from 15 March to 8 April 2012.
Logos Hope is open from 10 a.m. to 9:30 p.m. from Tuesdays to Saturdays and from 1 p.m. to 9:30 p.m. on Sundays.
Entrance fee of P20. Children aged 12 years old and below can enter the ship for free as long as they’re accompanied by an adult.
VISA and Mastercard issued credit cards are accepted.  Nike Sneakers | Fitforhealth – 2010 hyperdunk for sale Brown Release Details – nike roshe run trail black uk version for women