*Ongoing series on Hong Kong trip which I took seven months ago. I know I’ve neglected posting here but I’ve been busy and have been posting more in my lifestyle blog. Now more than ever, I’m determined to finish this Hong Kong series before my next trip! Afternoon tea at the Ritz-Carlton is served at the Lounge & Bar, which is at the 102nd floor of the International Commerce Centre (ICC) building in Kowloon, the top floors of which are occupied by the Ritz-Carlton, Hong Kong (102nd to 118th  floors).

The hotel can be accessed by getting off the MTR Kowloon station, walking through Elements Mall.  The hotel has an Arrival Lobby located at the 9th Floor of ICC, while the Reception Lobby is at the 103rd floor and we had to go one level down to access the Lounge and Bar, located at the 102nd floor and where afternoon tea is served. They serve afternoon tea until 6 pm, which was a good thing since we arrived at about 530 pm already. The opulent decor of the hotel was definitely continued on into the Lounge. The first thing that I noticed about the Lounge was the glitz and the sparkle of the large chandeliers hanging almost down to the floor and the mirrors reflecting all the tiny, twinkling lights. I’ve read about how some found all the Ritz-Carlton Lounge’s bling bordering on tacky but I thought it was still well-designed.  It was glamorous and extravagant, definitely and I understand why it would appeal to some and turn off others.  It was definitely NOT afternoon tea, colonial style. When we got there, the staff was already preparing certain areas of the Lounge for dinner but we were glad to see there were still a few having afternoon tea like us. We were seated in a booth/canteen style table facing the windows, giving us a spectacular view of Victoria Harbor and Hong Kong Island. While having tea at the Peninsula certainly made us feel like we were partaking of a piece of Hong Kong’s colonial history, tea at the Ritz-Carlton was altogether different.  I think it’s really because of the rich, modern, and luxurious surroundings, plus the amazing view.  While the place was predominantly filled with mirrors, glass, and ambient lighting, it was still quite cozy, with the English club-inspired chairs and the plush carpeting. 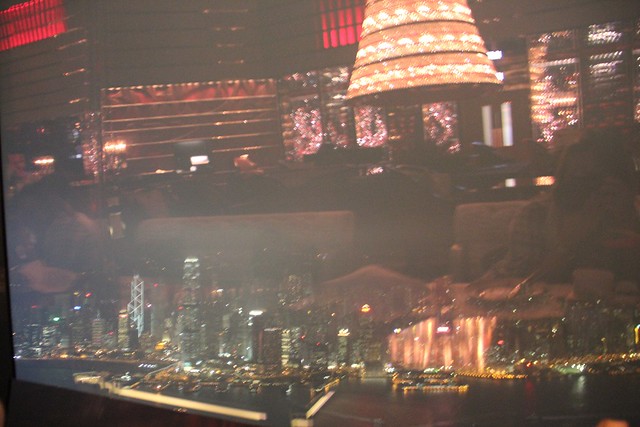 I quite regretted not dressing up for our visit here (we were supposed to have tea here on our first day in Hong Kong but we were still tired from our flight and had to brave Mong Kok on our first night). Since we came from Ocean Park, I was wearing uber-casual short shorts and just spruced up my outfit with a scarf. Good thing they didn’t turn us away (but take note they have a dress code for men). The food was also quite good. As compared to The Peninsula’s afternoon tea set, Ritz-Carlton’s had more savory treats, which I appreciated since I was already getting hungry and I was already more in the mood for early dinner rather than just an afternoon snack. The service at the Ritz-Carlton was impeccable.  We didn’t feel the hurried pace as in the Peninsula, and there were fewer fellow tourists. And while we were still there even if it was evening already and some were getting on with early dinner, we didn’t feel we were being rushed to leave. 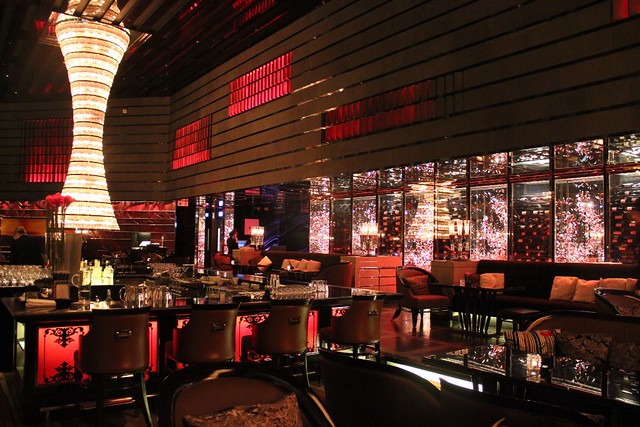 While I’d think having afternoon tea at the Peninsula Hong Kong is better in the early afternoon when there’s still a lot of natural light filtering down into the lobby area, the Lounge at the Ritz-Carlton takes on a different, and more glitzy personality when it turns twilight outside, evening creeps in, and the dazzling chandeliers and mirrors of the Lounge show off their brilliance in a way unseen during the daylight hours.

While we had afternoon tea here, it was really not hard to imagine how this would be a great place to have cocktails or even dinner. And of course, the spectacular view of the harbor was all the more enhanced at night. No more grayish panorama but one by one, the lights of Hong Kong turned on and were in full display. For the price of this afternoon tea, this was quite a luxury (we shelled out a total of HK$471 for tea for two). But like our experience in The Peninsula Hong Kong, this was a luxury we didn’t mind lavishing ourselves on. I’d rather have just afternoon tea here than eat dinner in a so-so place. It was quite a one-of-a-kind experience altogether.  Which is why if you’ll ask me which afternoon tea is better between The Peninsula or The Ritz-Carlton, I really can’t answer you. I’d say, like us, go to both and experience the best of different worlds.  If you want to try something here other than afternoon tea, their Chocolate Library experience is also well-recommended