One of the most fun and memorable days in our Hong Kong trip was our sixth day when we went to Hong Kong Disneyland. We may no longer be kids but we will always be kids at heart, and so a trip to HK Disneyland was definitely on my  list, especially since we set out to make our trip there as quintessentially Hong Kong as we can.  Resolved to enjoy HK Disneyland as much as we could, we left the bulky DSLR camera behind in our hotel room and just brought the trusty compact camera!
On our fourth day in Hong Kong, we went to Ocean Park and as posted here, I’ve shared my thoughts on Ocean Park v. HK Disneyland.  In the next series of posts (yes, it seems that our HK Disneyland experience deserves nothing less than a mini-series of posts), I will share with you my visit to HK Disneyland, and that in itself will explain why if I really had to choose between the two theme parks, I would choose HK Disneyland over Ocean Park. !
While others would have probably started out their day at HK Disneyland as soon as the gates of the park open (10 AM), we decided that we would go there sometime after lunch.  Our main reason was that we basically timed our visit to be able to watch the Halloween Parade (October 28), which was going to be in the evening and we wanted to have enough energy to enjoy HK Disneyland at night, when we knew we would appreciate Halloween even more.  Were it not for the Halloween Parade, I’d recommend to go there as early as you can to make the most of your 1-day ticket (at the time we were there in October 2011, the adult ticket was at HK$399).
Getting to Hong Kong Disneyland
We rode the Tung Chung line and at Sunny Bay MTR station, we transferred to the dedicated MTR for HK Disneyland. 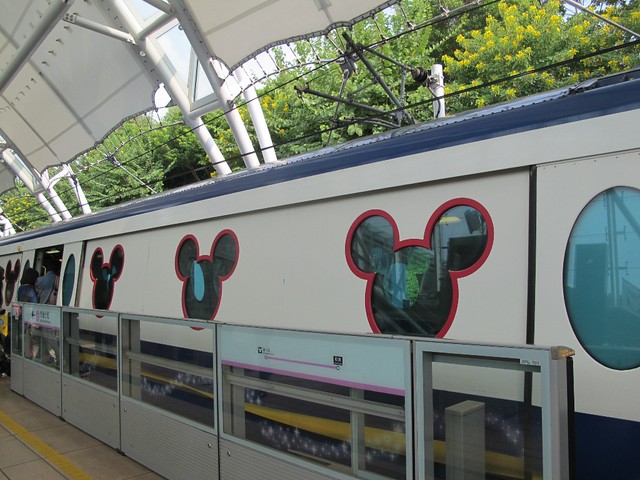 You will immediately get a sense of the Disney fun from the special train, with all its Mickey decor and touches, along with plush seats. 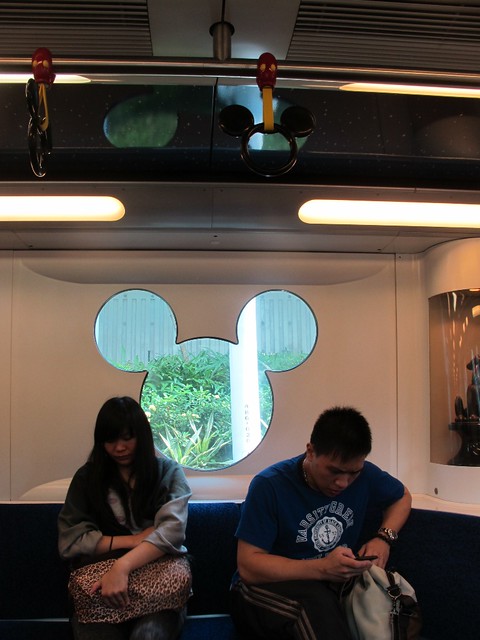 With their whimsical, nostalgic touches, even the train itself and the HK Disney MTR station already made me excited about our visit to this famous theme park. From the station, the entrance to the park itself is still quite a long walk. When visiting HK Disneyland, it’s good to have an overview of the layout of the park, and to take note of rides that you will prioritize, just in case you’re pressed for time: The photo above gives the general layout of HK Disneyland the time we were there but take note that there are now new additions, Toy Story Land (which opened in December 2011) and Grizzly Gulch (which recently opened in July 2012).I love this sign right at the entrance, which reminded me to enjoy myself and my day in the park. Like other Disneyland theme parks, the first area that will greet guests is Main Street USA, and being a girl, I appreciate the look and feel of this part of the park (along with Fantasyland of course!) But since it was Halloween, HK Disneyland was especially decorated with Halloween ghoulish touches. 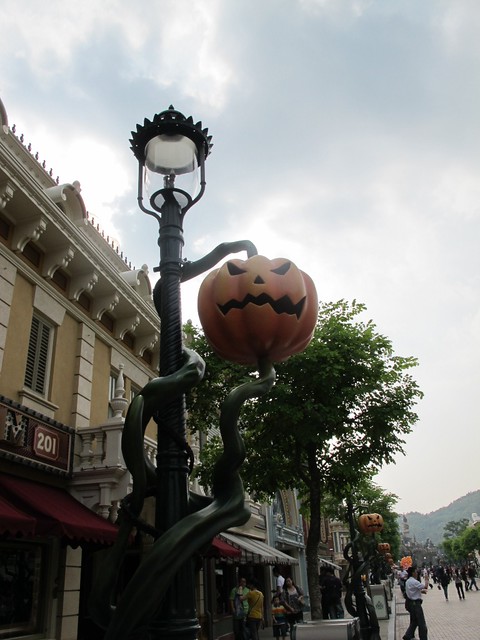 After we had late lunch at Plaza Inn, we were able to catch a part of the afternoon parade, where we saw some Disney characters come to life, like those from Lion King, Toy Story, and Peter Pan.  I think it was at this point when I wished that we were there with my young nieces and nephews, who I knew would have really loved to see these characters! While one would think that Disneyland can only be enjoyed when you’re with kids (whether your own or your nephews and nieces), I also got to enjoy it even without any little people tagging along. If you’re game enough, HK Disneyland can be a worthwhile and romantic destination even for couples (see how you can even have a fairytale wedding, or just a fairytale photoshoot)  in HK Disneyland here.

My other first time in HK Disneyland posts: