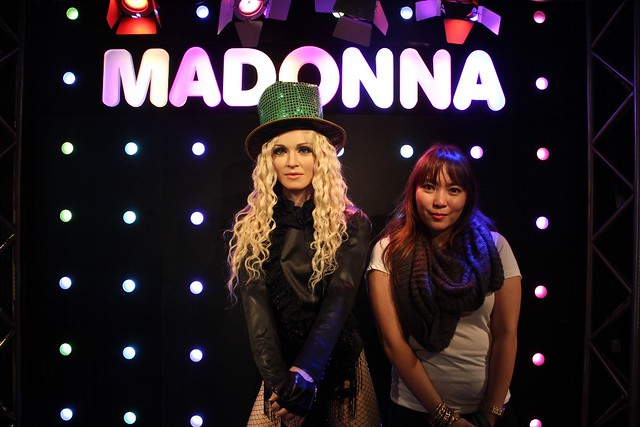 When we were at The Peak in Hong Kong, we included a visit to Madame Tussaud’s, the attraction featuring the wax figures of celebrities and noted personalities. There were Hollywood stars, Asian stars, cultural figures, sport celebrities, pop stars, world leaders, royalty, and even superheroes—the only place where we could “see” them all together.

We bought our tickets at the Peak Tram Lower Terminus (HK$185 each, which already included roundtrip peak tram tickets).  Madame Tussaud’s is in the Peak Tower complex, which is connected to the Peak Tram’s Upper Terminus. At the entrance to Madame Tussaud’s everyone (including those without tickets) can have their picture taken with the wax figure of Bruce Lee.
But having your picture taken with Jackie Chan was subject to additional charges.  And I wasn’t even allowed to take a picture just of the wax figure itself (notice this girl waving me away, thus the blurry picture): Madame Tussaud’s is actually well laid-out, with each group of celebrities located together in one area, and with each area with props, lighting, and own music.  I didn’t have any idea of what it would like so I was quite impressed—I didn’t have any idea that Madame Tussaud’s would be so interactive.  I thought the wax figures would just be in one big room all together, but they were grouped well together according to “themes”. To get an idea of the figures that you can see in Madame Tussaud’s Hong Kong, go here. 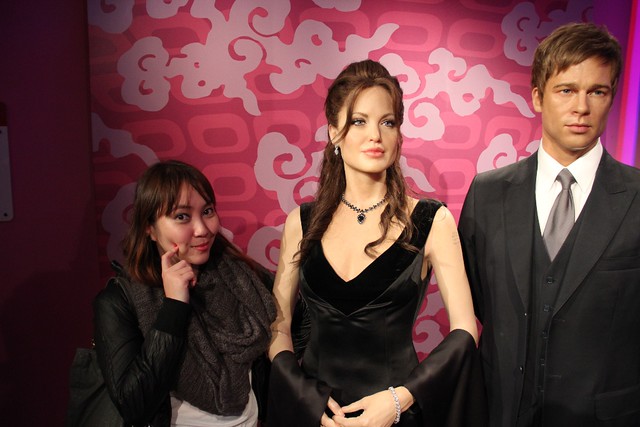 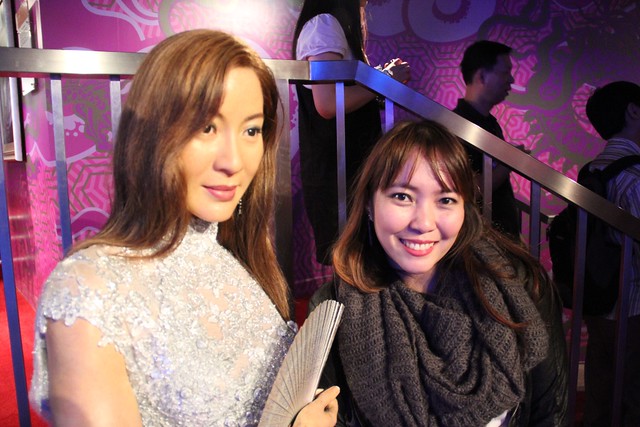 Some figures looked, unsurprisingly enough, waxy. But there were some who looked surprisingly life-like and very true to the look of the real celebrities, like the one of Michelle Yeoh and Lee Kuan Yew, and of Johnny Depp as Captain Jack Sparrow. There was also a room where we saw how these wax figures were actually made. And it was so impressive that they really take the time and effort to measure the actual persons and to mold their likeness in order to transform them into the wax figures.  Amazing!   The heights of the wax figures are also true to life so you’ll actually get the sense of how it feels like to stand next to your fave celebrity.

The only way to really enjoy Madame Tussaud’s and to maximize it for what it’s worth is to take pictures with the wax figures and be game enough to enjoy it! 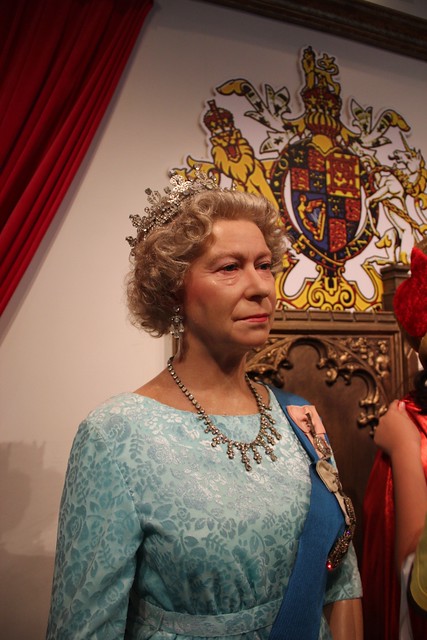 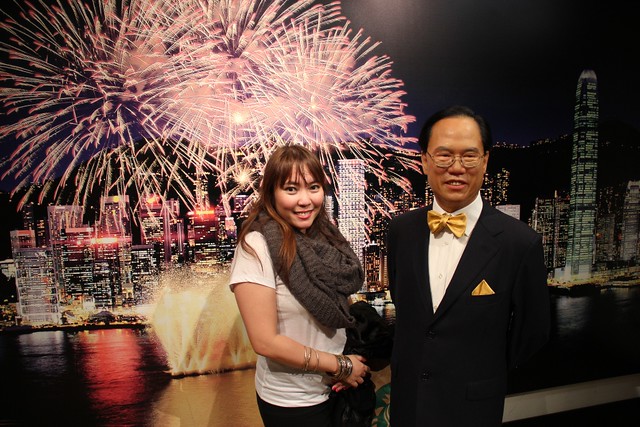 We also made sure to have fun, using the props and costumes that Madame Tussaud’s had on hand and incorporated into the settings for the wax figures. 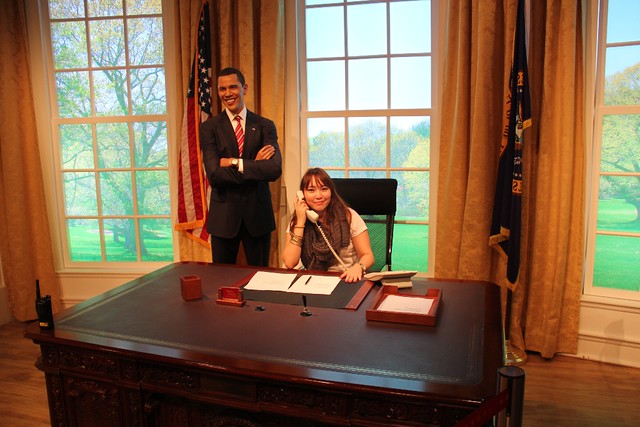 The area with pop stars (international as well as Canto-pop) was also with one of the most well-decorated figures. 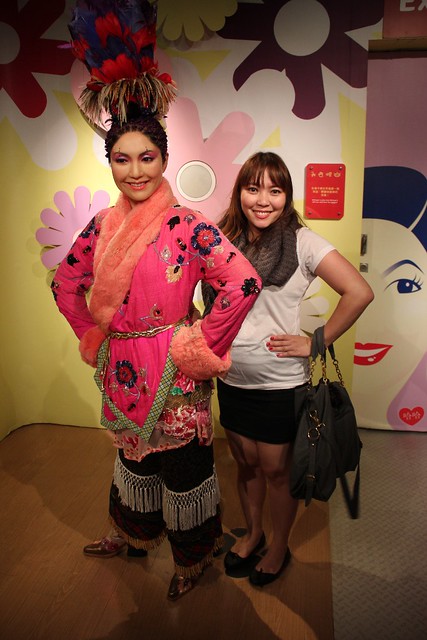 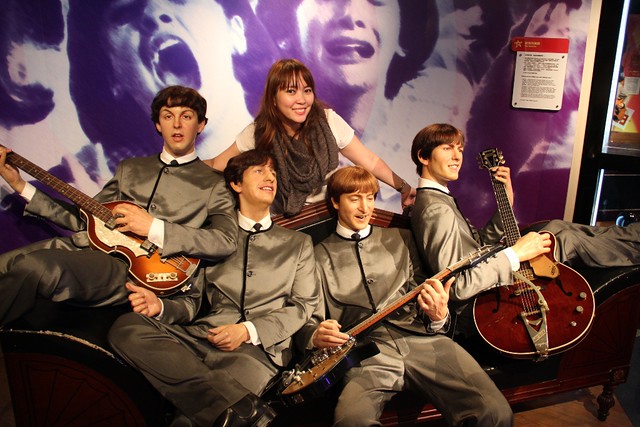 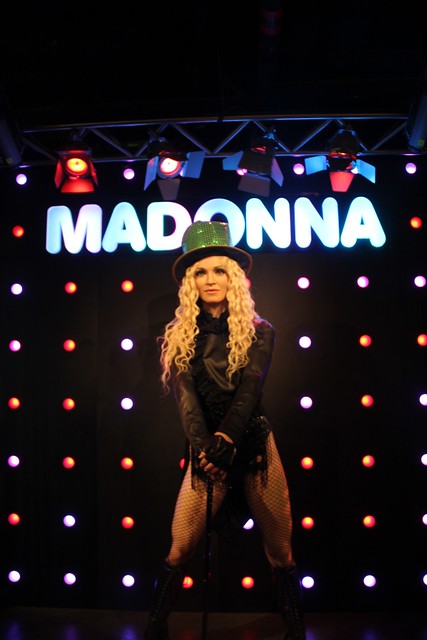 Madame Tussaud’s at the Peak is certainly not just a place for kids. It’s also an attraction which adults will enjoy, if you’re just game enough to have some fun—like we did! For sure, you can still have a great Peak experience without going to Madame Tussaud’s but definitely, you’ll have a more memorable and fun experience if you do. Cheers and fabulous travels! 🙂 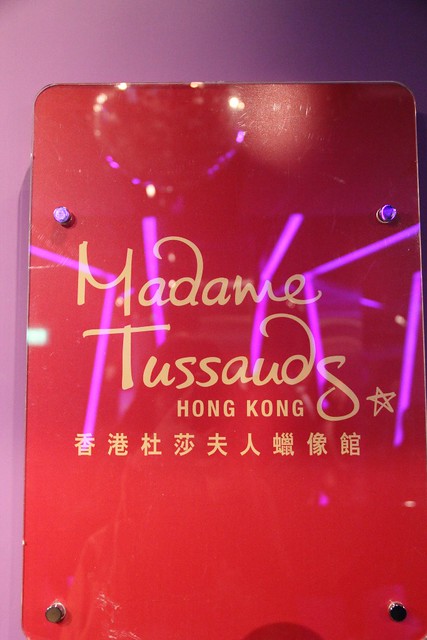 P.S. I am posting this entry while working from home in the aftermath of the monsoon rains and floods which hit Metro Manila and neighboring provinces from 6 to 7 August 2012.  While I have been lucky not to suffer from the floods nor even a power outage, I know a lot of people are still suffering .  I am thankful that all my family members and myself are safe, dry, and comfortable in our own homes—and I am praying hard that the rains stop for those who are in unfortunate circumstances because of the torrential downpours.  Relief efforts have already started but the pressing concern in my mind right now is what will be done after those relief efforts have subsided.  Right now, people are out there saving lives but afterwards, can we also save the quality of life of everyone? That means, better urban planning, garbage disposal, and preventing illegal urban settlers from clogging natural waterways.  Life will go on but there has got to be  a long-term solution to this perennial problem in Metro Manila.