One of my non-negotiable must-sees when I visited in Hong Kong was the Tian Tan Buddha (also called the Big Buddha), the famous giant buddha in Lantau Island.  I first learned about the giant buddha statue when it was featured in a scene with my crush Tony Leung, in one of my favorite Hong Kong movies ever, Infernal Affairs.  So of course, for my first trip to Hong Kong, I just had to see the Tian Tan Buddha for myself.

The Tian Tan Buddha is located in a complex adjacent to the Ngong Ping Village and the Po Lin Monastery. We arrived in the late afternoon by riding Ngong Ping 360’s cable car and because of the late hour, there weren’t too many tourists roaming about the place, which was a really really good thing. Since the Tian Tan Buddha is  the world’s largest seated buddha statue, I can just imagine that the place will be filled up with tour groups, as well as actual Buddhists wanting to pay homage to the bronze statue of Buddha. At first glance, the 268 steps it will take for us to reach the top was really daunting.  In fact, I’ve read of accounts of some people who went all the way to Ngong Ping without going up those steps, which for me was such a waste. We were there already and we could not not go up the top. It was quite tiring going up but we just took our time, and it was good that the afternoon air was already getting cooler.  It was also good that the stairs were arranged in such a way that there were flat areas every few steps to rest, and not just one steep climb. 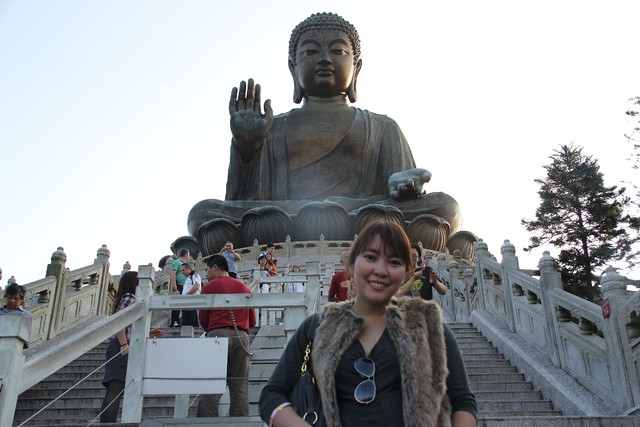 The Tian Tan Buddha looks very serene from up close, and one can really see the bronze material from which the statue is made. Also, we got to see the little details like the swastika on the buddha’s chest, and that he was sitting on a lotus flower.  His right hand is raised in the “Fear-Not” mudra, to symbolize the removal of affliction from all beings, while the left hand rests on the lap with palm faced outward, is thae “Wish-granting” gesture in Buddhism, signifying the compassionate vow to grant happiness to all men. The Buddha faces north, which is apparently unique among the great Buddha sttues, since all others face south.

I also liked the six smaller bronze statues surrounding the buddha called “The Offering of the Six Devas” and they simply glowed in the late afternoon sun. The view from the top of the Buddha was also so amazing. It’s said that on a clear day, one can even view as far as Macau from this vantage point.  I myself really liked it because from there, I can imagine being on the Great Wall of China, which is also one of my dream destinations.  And I’m just so happy that we were there on a day with really great weather, no rain, and more importantly, no fog! (Check out the funny adventure of Amy of Che-cheh.com when she went to see the Big Buddha when it was so foggy). And aside from the great photo op by the statue, it was really nice just to take more pictures of the buddha from all angles, with each angle seemingly showing a different expression or a new detail to the statue. There are still three floors beneath the statue made up of different halls for prayer and worship. Since we arrived in the late afternoon already and had to make it back to the cable car by 6 PM, we didn’t have time to go there. When we went down the steps and explored Ngong Ping further, I was content to take more pictures of the majestic Tian Tan Buddha in the fast changing light of sunset and twilight. It was time to take one last look from our cable car at the majesty of the Tian Tan Buddha, blessing us with its serenity and quiet grace, and with its upturned right hand seemingly bidding us farewell as we went and journeyed forth into the dusk. How to get there:

The Tian Tan Buddha is in Ngong Ping, Lantau Island and is open to visitors daily from 10 AM to 530 PM. Take the MTR to Tung Chung Station, then take the 1-hour bus ride on Bus 23 from the Tung Chung Town Centre bus terminus to Ngong Ping(HK$17.20 for adults on weekdays and HK$27 on Sundays and public holidays). You may also go to Ngong Ping from Tung Chung by cable car, which is the faster and more scenic option (Ngong Ping 360’s cable car operations is currently under maintenance and will resume only on April 2012).