After the refreshing, rural sights in Tai O fishing village,  we headed back to the Tung Chung Town Centre bus terminus and proceeded to Ngong Ping 360 as well as to the Tian Tan Buddha, another top attraction in Lantau Island.  The journey to Ngong Ping begins at the Ngong Ping cable car terminal, which is just a minute’s walk away from the bus terminus. And I must say that the cable car itself is an attraction on its own, giving visitors to Ngong Ping a one-of-a-kind Hong Kong experience. Visitors have the option to go on a Standard Cabin or a Crystal Cabin cable car.  We chose the crystal cabin (HK$169 for an adult round trip ticket), because of the novelty of a glass-bottomed cable bar.  Anyway, the price difference between the standard and the crystal cabin was not that much, considering that  the crystal cabin is really what makes the Ngong Ping cable car the first of its kind in Hong Kong.  While each cable car can fit as much as 17 people (10 sitting, 7 standing), we were able to get a crystal cabin all to ourselves (I guess since we were already there later in the afternoon). The cable car traverses 5.7 kilometers from Tung Chung, crosses Tung Chung bay, and turns 60 degrees in the air toward North Lantau. Just seeing the cable cars from the station made my heart beat faster. And all the more, when we got on the crystal cabin. At first, the view of the ground below was somewhat scary, especially when the cable car already started moving.  The crystal cabin had partially open windows so the higher we went up, the wind became cooler and if we made sudden, jerky movements, we could feel the car shake. But then we just enjoyed ourselves and the views. Actually, if you’re the type who’s afraid of heights or who has vertigo, it can actually be a scary experience, especially as the cable car moves over water (I got frightening images of plunging into the depths below!). This is me pretending to be really scared 🙂 But really, I just enjoyed the whole experience—and the scary feeling is also part of what makes it exciting! That and I just relied on the fact that the cable car has a good safety record.  And it was a good thing that we were there in the late afternoon, when the noon heat was already gone and the light was just beautiful. 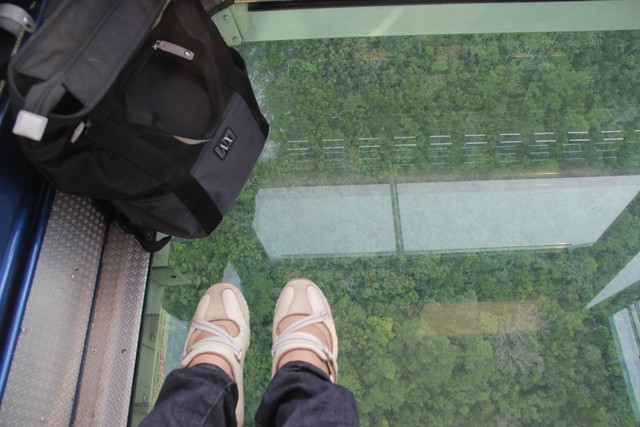 We moved over water, and over mountains, and along the way, even glimpsed the Hong Kong International Airport.  It was really a heady experience—nothing quite like the feeling of the cool wind rushing into the cabin, with a spectacular 360 degree panoramic view of Lantau Island as well as the one-of-a-kind bird’s eye view at the bottom of our feet. And finally, we got our first glimpse of one of Lantau Island’s must-see attractions, the Tian Tan Buddha, which also signaled that we were near Ngong Ping Village. After we enjoyed the sights in Ngong Ping Village and visited the Tian Tan Buddha, it was time to head back to Tung Chung.  The last cable car left Ngong Ping at 6 pm. Since we made the most of our time there since we arrived in the late afternoon already, we took one of the last cable cars out, so we were faced with a queue and we had to share our cable car with a couple. Another good thing with the crystal cabin was that there was a shorter line.

It’s only by riding Ngong Ping’s cable cars that you can get amazing aerial views of the Tian Tan Buddha. And the view on the way back to Tung Chung was just as nice as when we were on our way to Ngong Ping. The Ngong Ping cable car (especially the crystal cabin) is really a must-try attraction in Hong Kong.  You’ve got to try it!

Ngong Ping 360 Cable Car will be closed for maintenance works until April 2012.
Round trip ride on Crystal Cabin is now priced at HK$188. For other price details, click here.
Nearst MTR Station: Tung Chung
Another option to reach Ngong Ping is to take Bus 23 from the bus terminus at the Tung Chung  Town Centre.