I love it when serendipity weaves its magic in everyday life, but most especially when it works a hand in travel. Our visit to Chi Lin Nunnery and Nan Lian Garden when we were in Hong Kong was certainly a touch of serendipity, in that it wasn’t really in our initial itinerary. I wanted to experience as much picturesque nature in Hong Kong as we can, but despite our 8-day trip, we couldn’t squeeze in a visit to the Wetland Park anymore.  So I was content with visiting a nearby park, like Kowloon Park.  But in the course of finalizing our itinerary, I came across Chi Lin Nunnery and Nan Lian Garden, which are highly regarded as “hidden gems” in sprawling, bustling Hong Kong.

From our hearty lunch in Tim Ho Wan’s Sham Shui Po branch, we proceeded to the Shek Kip Mei station on the MTR’s green line and went down three stops later at Diamond Hill station.  From the station, there were not-to-be-missed signs pointing the way to Chi Lin Nunnery and Nan Lian Garden, which are actually two different complexes but are connected by a footbridge over a main thoroughfare. We first went to the Chi Lin Nunnery, since it was farther away from the station.  Chi Lin Nunnery is about a three-minute walk away from the station.  It’s supposedly one of the most well-known Buddhist places of worship in Hong Kong.  However, it held a certain novelty for us since it was certainly not in the usual Hong Kong city tour packages.  And neither of us had ever been there before.

I love traditional Chinese architecture—something about it makes it look so exotic to me, as if it doesn’t really belong in the modern world, and yet it conveys nothing but serenity.  One of my regrets when I went to Singapore was not visiting the Chinese and Japanese Gardens there, and the only time I’ve been to Japan, I wasn’t even able to see a single pagoda!  But being in the Chi Lin Nunnery and Nan Liang Garden definitely satisfied this craving for traditional East Asian architecture. We were greeted by a small park/walkway filled with large trees that provided us some shade from the noon heat as we walked towards the monastery complex.  Then the entryway led us to a large courtyard, giving us a view of Chi Lin Nunnery, which is built in the architectural style of the Tang Dynasty. The ubiquitously Hong Kong skyscrapers in the background only serve to place Chi Lin Nunnery in stark contrast, making it an oasis in the midst of the urban bustle.  The whole complex is said to be constructed completely without the use of nails, but by just special techniques in interlocking the pieces of wood together. Amazing! 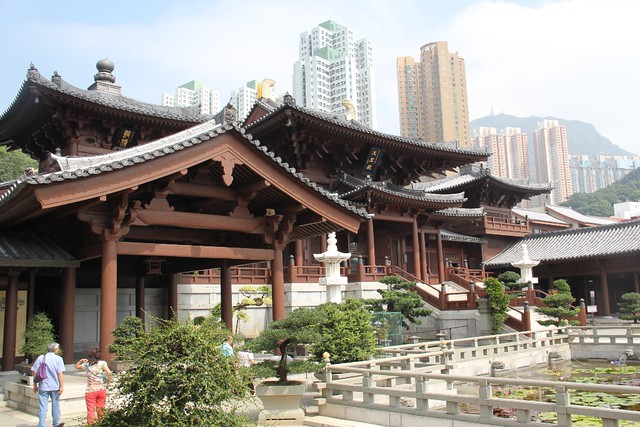 With the area being so picturesque, Chi Lin Nunnery offers so many photo op moments, which of course, I took advantage of! Just when I thought the Chi Lin Nunnery was so picturesque, we crossed the walkway towards Nan Lian Garden and I was instantly transported to easily one of the most beautiful gardens I’ve ever seen.  It’s really true that this is the most photogenic spot in Hong Kong! We were welcomed by a view of the Lotus Pond, and right in the middle was the stunning gold pagoda called the Perfection Pavilion, and is connected by two bridges in a great shade of red orange called the Zi Wu Bridges (of course everything has to have a name!). So stunning! Although the bridges and the pavilion itself are not accessible by visitors, I was content just to take pictures of the scenery. I couldn’t get enough of it that I took pictures almost from all angles. It was just soooo nice. To the left of the pavilion is an area called the Rockery, which houses interesting displays of rocks from the Hongshui river and just outside is a display of bonsai trees, which I also liked. Further on, there were still sights to see like the Blue Pond and Pavilion Bridge  and the Nan Lian Rocks.  However, for me, they couldn’t compare to the beauty of the Perfection Pavilion and the Zi Wu bridges. 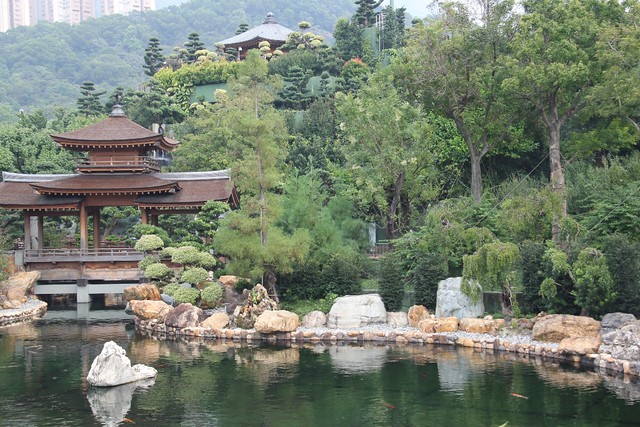 For dining options within Nan Lian Garden, just off another picturesque structure of a traditional Chinese farmhouse called The Mill is the Chi Lin Vegetarian Restaurant.  There’s also a snack shop by the Tang Gallery, selling coffee for HK$12 and sandwiches for HK$15.

However, what really caught our eye was the Song Cha Xie (“The Pine Teahouse”), which is the structure just off the Blue Pond and Pavilion Bridge.  We were surprised by the prices in the menu posted by the entrance—the tea servings were so expensive, with the cheapest at HK$120! From the menu, it looked like they were serving rare species of tea, thus the high prices. Nan Lian Garden was clean and well-maintained.  Their trash bins even echo the wooden structures of the traditional architecture of the garden, which I even found charming. We ended our visit to Nan Lian Garden by its front gate and this was the view that would have greeted us had we started with the garden instead of Chi Lin Nunnery. All in all, Nan Lian Garden was  really a beautiful, perfect place to spend a lazy Sunday afternoon in Hong Kong.  To me, it didn’t feel touristy at all.  And for a Sunday afternoon, there weren’t even too many tourists and locals milling about, considering that TripAdvisor  has listed Nan Lian Garden as the top 2 attraction in Hong Kong. I guess it’s because  it’s not (yet) integrated in the usual city tour packages—which is a good thing for independent travelers.  I felt that going here was a secret that I can share with travelers who take the time to learn about and see places in Hong Kong and who’d want to go beyond the usual touristy spots.

And I guess, it also depends on each traveler’s taste. I thought the Chi Lin Nunnery and Nan Lian Garden were really perfect antidotes to the craziness of TST, Mong Kok, and even Central.  If you should ever get tired of all of Hong Kong’s malls and all the shopping, go to Chi Lin Nunnery and Nan Lian Garden.  But let’s just keep this a secret between you and me ok? 😉

How to get there: