Halloween weekend started early when I got to  visit Hong Kong Disneyland in our trip back in October.  It was a Thursday and still October 28 and yet the whole park was already filled with everything Halloween as the park had an ongoing celebration called Disney’s Haunted Halloween, with special attractions to all sorts of ghouls and ghosts and everything-that-you-can-imagine-Halloween characters.

One of the must-sees for our Hong Kong Disneyland trip was the Glow in the Park Halloween Parade.  It was one of the main reasons why we decided to go to HK Disneyland in the afternoon and not as soon as it opened in the morning—because we wanted to have enough energy to enjoy the Halloween Parade and the other Halloween attractions, which we knew would last well into the night.

Disney simply loves to throw parades and it’s just as well because they really go all out, in a way that only Disney possibly can. As soon as it was announced over the loudspeakers that the parade will soon start, park goers clamored for their own space by the path where the parade will pass. Luckily for us, we were able to position ourselves with a front-row view in front of Sleeping Beauty’s Castle and we sat on the side of the road facing the castle so that it would serve nicely as our backdrop. 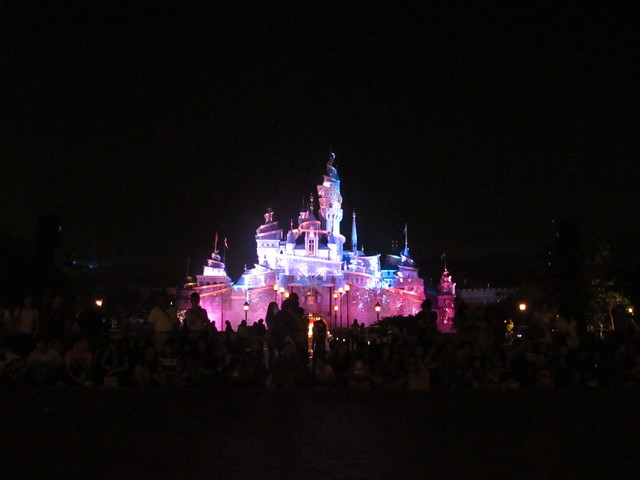 Just a side note on the food in HK Disneyland.  There are carts and stalls scattered all over the park, selling beverages and some light snacks like hotdogs and squid tentacles (!).  Most snacks and beverages are priced at HK$12. However, we got an extra-special snack, the turkey leg (HK$48), which come to think of it, where else will you be able to get but here?

Now, on to the parade.  There were basically lots of dancers and lots of floats and props, with each float having its own set of music.  It was my first Halloween parade and I must say, it was really fantastic! I appreciated the hard work and preparation that must have gone into creating those costumes, props, floats, and dance numbers.  I simply loved the costumes and the pageantry of the whole event.

Here are some photos from the parade: I’m no longer a kid but parades like this I still appreciate 🙂  So can you imagine, what more if you’re there with your kids?  More pictures: We actually didn’t plan our Hong Kong trip around Halloween. It was only when we were about to leave for Hong Kong when we realized that we will be in Hong Kong around Halloween weekend and so that’s when we timed our day in HK Disneyland on a Thursday, so that we would be able to experience HK Disneyland on a special night. It was also a good idea that we didn’t rush into the park at opening time—that way, we had enough energy to enjoy the Halloween sights and feel of the place at night, when the effects were better appreciated. If we had been there early, we might have already been too tired to stay on the whole evening.

So guys, timing matters a lot.  If you’re planning a visit to Hong Kong and HK Disneyland is in your itinerary, it’s really great to visit during special occasions like Halloween and of course, Christmas. I would definitely want to go back to HK Disneyland during Christmas, with all the  beautiful lights and decors set up. 🙂