Aside from Lee Boutique Hotel, I also stayed at Canyon Woods Residential Resort in Laurel, Batangas during my Tagaytay weekend for the wedding of one of my oldest friends. Just like Lee, this stay was also through a group buying website, but this time through Ensogo.  The cost was P2,999 for a room accommodation in one of their Casitas, which is at a 50% discount from the regular rate.Canyon Woods has been around for a while. I knew that it used to be an exclusive community open only to members or lot owners. It was only through Ensogo that I learned that they now have accommodations for rent even to non-members. We were able to check-in to our room late Saturday night already since we came from my friend’s wedding in Ville Sommet.  We had to check in at the main Clubhouse of Canyon Woods to get the key for the room, which was still a few minutes’ drive away.

The room in Casita #2 was really big.  Each Casita has four rooms and it was good that I got a room on the upper floor for the  high ceiling. Arriving in the room late that rainy night, the room actually felt too big. The bed was king-sized and the room even had a couch and a kitchen counter-top complete with a sink and a huge marble bathroom with separate spaces for the bathtub and shower. We didn’t need all that space.  And the large windows instead of walls actually felt kind of freaky and we were scaring ourselves that there might be  people lurking outside the windows. 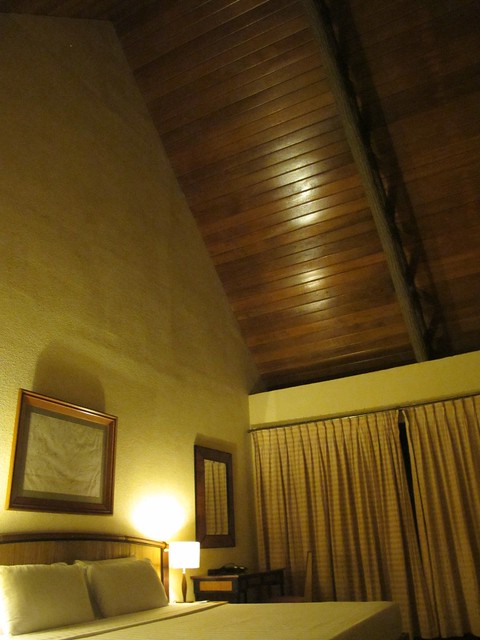 But in the morning, I opened the wide windows and woke up to the amazing views and everything looked and felt instantly better. We walked to a club house called The Pavilion where breakfast was served and we were treated to restful views along the way, giving us a feel that we were in Baguio.  We slept in and barely made it to breakfast on time but despite the lateness of the morning, the air was still very cool. The dining area is located on the second floor of The Pavilion.

We got a table by the outdoor veranda overlooking a small lake where there were paddle boats available for use. The ambiance was only ruined by a mom shouting to her kid down below.  We had the option to avail of breakfast buffet but with an additional P200 but we just got it a la carte since it was filling and good enough. After breakfast, we spent the rest of the morning going around the nearby areas, such as The Lodge-–which is a newer building for Canyon Wood members and guests. We were even toured around the suites and rooms. The overall atmosphere of Canyon Woods was very tranquil and quiet. Tagaytay City itself can become crowded during weekends, especially in the main ridge area.  But there were no such crowds here. It was nice to know that Canyon Woods—although situated in Batangas already—was only a short drive away from the city proper.  We were able to walk and commune with nature, even for just a little while. If you do decide to book a Casitas accommodation in Canyon Woods, I suggest that you request for Casitas #5 or #6 as these cabins have the best views of the lake.  Cheers! 🙂