After getting into the intricacies of packing and products then the philosophy of girlfriend getaways, let’s now get into the more practical matter of how to get to Ilocos Norte. Ilocos is fairly easy to explore—no need for an all-inclusive tour package (although we ended up booking our own driver/tour guide both when we were in Pagudpud/Bangui and in the Laoag area)
As you’ll recall from your grade school HEKASI/ Sibika Philippine geography lessons, Region 1 is made up the provinces of, of among others, Ilocos Norte and Ilocos Sur. 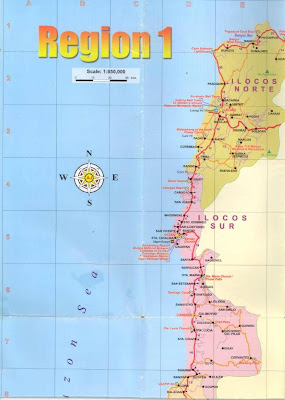 Getting to Ilocos Norte via Laoag. One can either fly in, drive, or take the the bus to Laoag City, the capital of Ilocos Norte. Philippine Airlines (PAL) has daily flights and Cebu Pacific flies there too but as you know, I would recommend taking PAL for reasons already explained at length here. And it also happened that PAL had better flight schedules on our preferred dates (our flight to Laoag was in the morning while our flight out was at 7:30 pm).

From one of the Department of Tourism maps available for free from the airport:

“How to get to Ilocos Norte. The easiest way to access Ilocandia is the 45-minute Manila-Laoag way via Philippine Airlines and Cebu Pacific. Daily flights are being offered by Philippine Airlines while Cebu Pacific offers 5 flights a week. Mandarin Airlines offers flights to Kaoshiung Taiwan on Tuesdays and Fridays. By land, several bus lines such as Partas Transit, Florida, Farinas, Maria de Leon, Autobus, and RCJ bus line serve the Manila-Laoag City route. These airconditioned public buses will make your 8-10 hour travel a relaxing journey. From their stations in Laoag City, various public vehicles such as jeepneys, tricycles, and mini-buses are available in roaming around the province. Traveling by private car, however, will lessen the travel time by 1-2 hours.”

Chips for the trip courtesy of ANT 🙂 As for our trip, the only glitch on our PAL flight from Manila to Laoag was the unexplained delay of more than an hour. More than an hour before our 9:30 flight, we were already checked in because we really planned to have breakfast in NAIA Centennial Terminal 2 (see next post). However, the only time we noticed that our flight was delayed was when we realized we weren’t boarding even though it was already past 9 am. And notwithstanding this recent incident, I still find Cebu Pacific objectionable. Anyway, we found ways to entertain ourselves. 🙂 Posing for our first ever group picture on this holiday:) B. and me unlocking the secret of camera angles too! 🙂 (can you see the difference?) And, getting our fix of local showbiz chika (I’m sorry but we use our brains too much in our jobs and on getaways as this, they need some rest!) Waiting for our plane to be serviced (which came from Hongkong pa!) 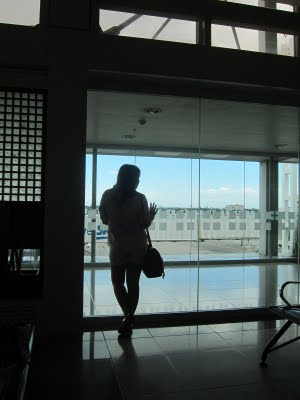 Finally arriving in Laoag International Airport—without being harassed by souvenir items and instant noodles, what a difference! 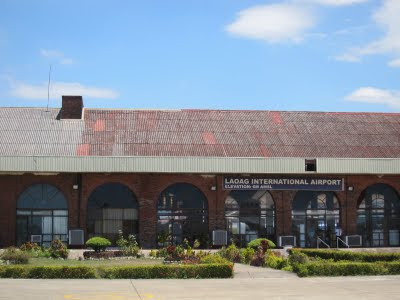 Getting to Pagudpud. After we had lunch in Jollibee Laoag (we had to get to Pagudpud fast!!), we passed by a local mini grocery store to get some “supplies” before we proceeded to the bus station bound for Pagudpud. 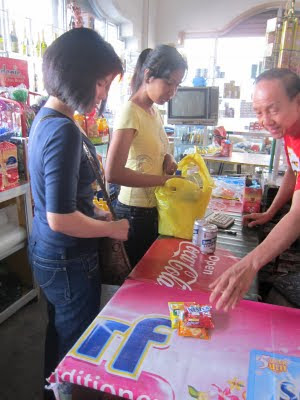 We took the Claveria Tours/ St. Joseph mini bus (the station is walking distance from Jollibee) that go to Claveria and told the conductor that our stop was Gaoa (not downtown Pagudpud because we were staying in a resort in Blue Lagoon). Our fare was only P80. We asked but there were no airconditioned buses or public vans going there, unless you hire a private van.

Part of the charm of riding local provincial buses include trays of eggs along the aisle (which turned out to be bound for our resort too!) and scenes such as this evangelical preacher: And hey, they have pink urinals too! The trip took more than 2 hours with all the stops of the other passengers, which I regretted since that means we won’t be able to have a lot of time to rest in our room before going to the beach. Finally, we arrived at Gaoa (landmark was Bingbong’s restaurant) and we had to take tricycles (P60 per trike) to our resort in Maira-ira Beach. The tricycles were an issue to ANT who has some sort of phobia for tricycles. Eventually we were able to convince her to be more adventurous! I. and me riding the trike to Blue Lagoon And we were rewarded with sights such as this. The scenery was beautiful and could even pass for Hawaii! 🙂 “This is the beginning of a new day. You have been given this day to use as you will. You can waste it or use it for good. What you do today is important because you are exchanging a day of your life for it. When tomorrow comes, this day will be gone forever; in its place is something that you have left behind…let it be something good.”- Author Unknown

Wishing us all more travels! Cheers! 🙂